How to Care for Jewel Orchids (Ludisia)?

Home » Orchids » How to Care for Jewel Orchids (Ludisia)?

In most cases, your reason behind buying an orchid has got to be for its bloom. Not the Jewel Orchid, however. Known as the Ludisia discolor, the Jewel Orchid is appreciated far more for its foliage than its blooms. 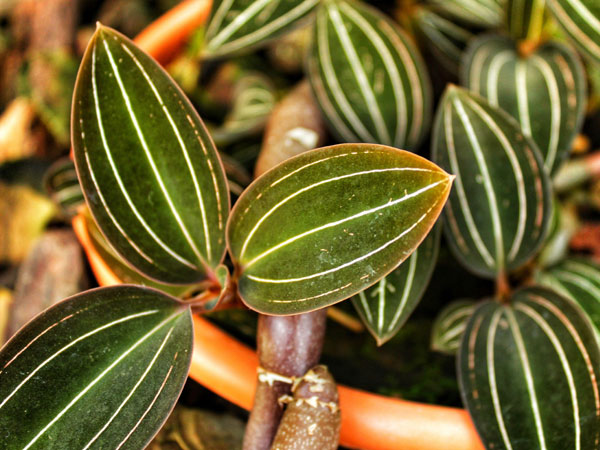 One peek at this orchid and you’ll understand why. White pinstripe markings that cross the entire length of dark green leaves, create a unique contrast that will appeal to those looking for something a bit different.

If you too are charmed by the Jewel Orchid, learn how to best take care of it reading my care tips below.

This isn’t a tall growing orchid, instead it tends to spread out rather than grow upwards. The flower spikes, however, grow tall and can almost triple the height of the plant.

In ideal light, the foliage has a rapid growth pattern, only to slow down in winter. The flower spikes will grow much faster than the rest of the plant.

Its dainty, white flowers can’t compete with the blooms boasted by Phalaenopsis orchids, but as I mentioned, this orchid has other features that make it stand out.

It has medium green leaves with prominent silver veins that cover almost the entirety of the leaves. But it’s also a rare variety as opposed to the Ludisia discolor. Still, as far as unique foliage goes, both varieties are a worthwhile choice. 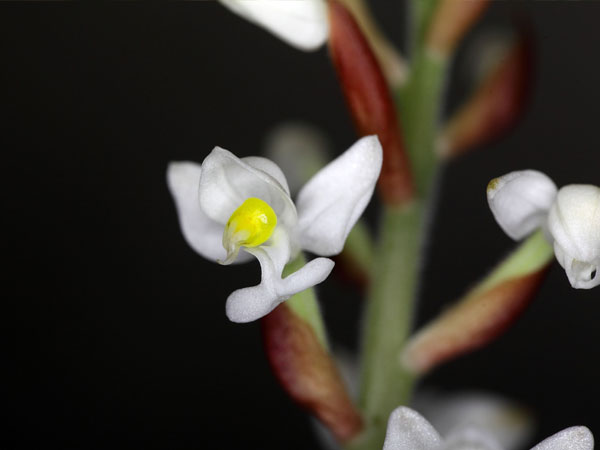 Filtered light or semi-shade works best for this orchid variety that grows low in its natural habitat. Indoors, all other light conditions, except for direct light will work out well.

You can place it near a north-facing window, or a few feet away from other windows, ensuring that the plant is shielded for any strong direct sunlight.

Jewel orchids enjoy slightly moist soil, but this is not an invitation to have its soil completely drenched in water all the time.

On the contrary, you should wait for the top soil to dry out before watering again.

You should also not allow the soil to become completely dry. Instead, water deeply, allow excess water to drain, empty the saucer and don’t water again until the top inch of the soil starts to become dry.

These same rules apply for most orchid varieties, except some orchids will tolerate dry conditions much better than the Ludisia.

The type of potting mix you’re growing your orchid in also determines how often you’ll need to water. Some mixes will dry out quicker, while others will retain water for much longer.

Regular orchid potting mixes aren’t the best choice for the Jewel orchid. The potting mix for Ludisia orchids should be high in organic matter and porous.

You don’t want the soil to retain much water, so don’t opt for regular potting soil either. At least not without mixing in some perlite or other media which help with drainage.

On the other hand, you also don’t want the soil to dry too quickly, so maybe skip the bark from the potting mix or add very little. Mixes containing peat moss, perlite or sand should be favored over those containing bark.

The temperature range that works for your other orchids will also work for your Jewel variety too. This means that they’re just as suitable for indoor growing as your average Phalaenopsis.

Jewel orchids enjoy temperatures in the 75-80 F during the day, and not below 60 F or so during the night. Average room temperature works fine for these plants.

While they’re not tolerant of cold, they also have an aversion to rooms that are just too hot. Problems can arise especially if you place your Ludisia orchid close to heating or cooling vents or radiators.

Next to optimal watering, average humidity works best for this orchid variety. Unless you’re really bad at keeping up with the watering regimen, then you need to up your game in increasing humidity levels.

It’s enough to fertilize your Jewel orchid 2-3 times a year in the growing season. It’s not a hungry plant, so you don’t need to feed it regularly.

When you do feed it, however, use a general orchid feed, or even other balanced houseplant fertilizer. Dilute the fertilizer, so it’s not too strong and don’t apply on dry soil to avoid burning the roots.

Because these orchids favor spreading over growing tall, they don’t need very deep pots. When your Ludisia becomes top heavy and roots become overcrowded, it’s time to switch to a bigger pot.

When repotting, check the health status of the roots just so you can make sure there are not rotten or damaged parts. If you do find any, make sure you remove them and use sterile tools to prevent diseases.

How to Propagate Jewel Orchids?

Since we’re at the topic of repotting, this is a good time to harvest some stem cuttings should you want to propagate your orchid.

Harvest stem cuttings that still feature a few upper leaves and place in a potting mix. Keep in warm, moist soil out of direct light and it will root in about 2 months.

While you’re waiting for it to root, make sure not to knock it over. Until roots develop, the stem cutting will not be properly anchored in the potting medium.

Don’t overwater nor should you allow the soil to dry out to the bone. Keep a good watering regimen, avoid temperature fluctuations and you should see your stem cutting thriving within a couple of months.

If you’re looking for something out of the ordinary in an orchid, the Ludisia happens to be an interesting choice for an orchid.

The Ludisia isn’t showy when it comes to its blooms, but makes up for it with its peculiar foliage, regardless of the Ludisia variety you get your hands on.

Indirect light, warmth, slightly moist soil and just a bit of feeding will keep this orchid happy and thriving. 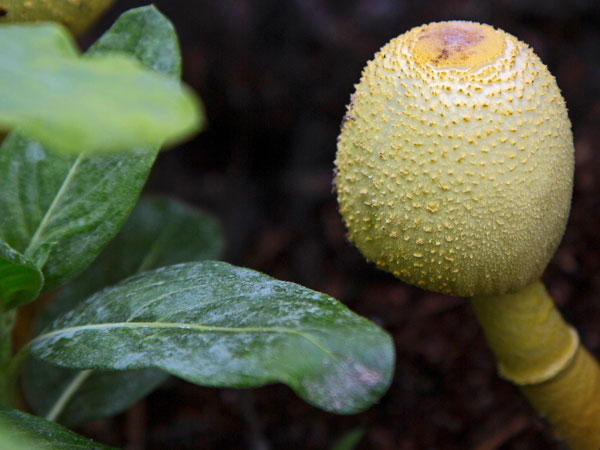 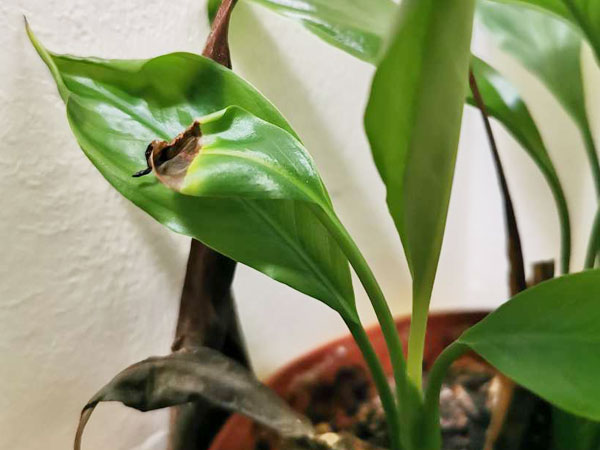 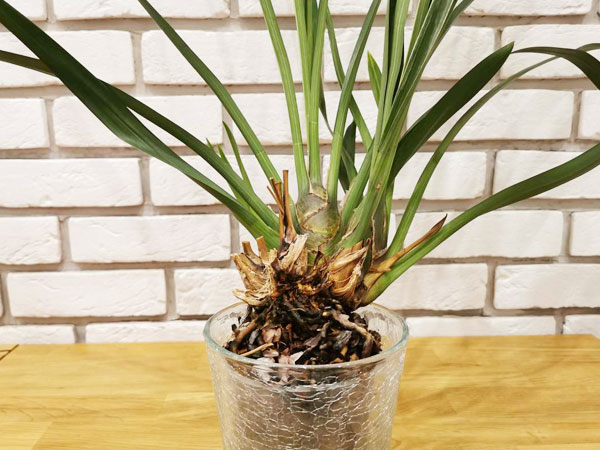 Why Cymbidium Orchid Not Flowering? 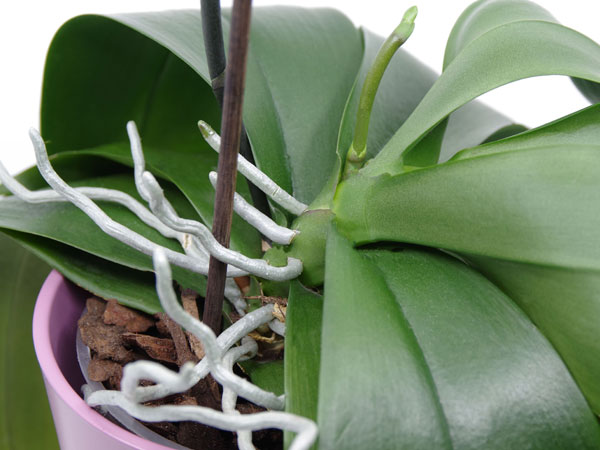