How to Water Alocasia Plant?

A subtropical plant native to Asia and Eastern Australia, the Alocasia plant is best known for its stunning foliage that impresses not only in terms of size and appearance, but also texture. 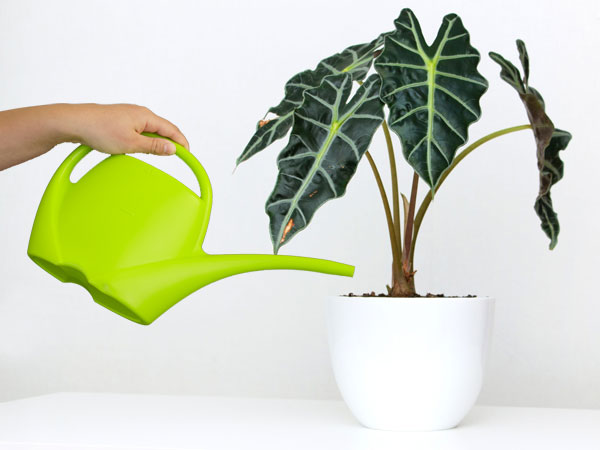 Despite hailing from subtropical regions, you can grow an Alocasia plant indoors if you understand its requirements.

One of these requirements is correct watering. Alocasia plants can be fussy if they’re watered incorrectly. More so if they’re overwatered.

You may think that there isn’t too much to it when it comes to watering Alocasia plants. Yet, if done incorrectly, your Alocasia plant can suffer greatly.

Here are some of my tips on how to meet your Alocasia plant’s water requirements:

If you want your Alocasia to thrive, water it moderately. How does that look in practice? Simply water the soil uniformly.

When water starts trickling out of the draining holes, stop watering. You don’t want the soil to get drenched in water. Hold off the next watering until the top layer of the soil starts going dry.

A good watering routine goes hand in hand with choosing a good potting soil. Avoid heavy soils and use well-draining and well-aerated mixes.

Potting mixes that contain substrates like coconut coir, peat, perlite and coarse sand are all suitable for Alocasia plants.

These mixes don’t get compacted or oversaturated with water. Even so, just because you’ve chosen a good potting mix, it doesn’t mean you can get overzealous with the watering can. The recommendation to water moderately still holds.

Beyond these tips, another important aspect is to adjust the watering frequency depending on seasonal changes. Here’s what you need to know:

Not to mention that these plants do most of their growing in spring and summer, so their need for resources is also higher.

Monitoring the moisture level of the soil is important to determine how often you need to water your Alocasia.

Always allow the upper levels of the soil to dry, otherwise you risk overwatering.

In winter, Alocasia plants don’t have the same watering requirements as they do in summer. Low temperatures, low light levels, slow evaporation, and a slowing of growth means less water is needed.

This doesn’t mean you can ignore your Alocasia during winter and allow the soil to  dry completely.

Although the stalks of the Alocasia can hold some water, they don’t resist for long periods without water and will start showing symptoms of dehydration.

Continue monitoring the moisture level of the soil and water the plant as soon as the top levels of the soil start to become dry.

I’ve already touched upon some of the factors that influence the water needs of Alocasia plants as the seasons change.

But even within the same season, several factors can alter how often you need to water your Alocasia.

Here’s an overview of each:

In their natural habitat, Alocasia plants grow under the canopy of trees, receiving filtered light. When grown indoors, these plants thrive in bright, indirect light.

Some varieties of Alocasia can better adapt even to low light conditions, others will seek to grow towards the light if they’re positioned in a dark corner of your home, for example.

The amount of light your Alocasia receives will determine their growth rate, the rate of evaporation, and their watering needs as a consequence.

When light is not sufficient, the plant may grow leggy, the rate of evaporation decreases, and the potting mix can take longer to dry. There’s also an increased risk of root rot due to overwatering.

The biggest shift in temperature occurs between summer and winter, so watching out for your Alocasia’s watering needs is even more important during these times.

Apart from watering needs, be careful to protect your Alocasia from cold drafts during winter. Even a cold draft can induce temperature shock and cause foliage loss or even more severe damage to the plant.

Another equally important factor that will determine the watering requirements of your Alocasia is the level of humidity.

Humidity levels aren’t constant, not even within the same season, so any significant changes can have repercussions on how much water an Alocasia will need.

Alocasias thrive in a high humidity environment, which would not be natural for your indoors. The plant can adapt to humidity levels of around 60%, which can be achievable indoors.

When humidity levels drop too much, you will need to seek out ways to increase humidity around the plant. Both a humidifier or humidity tray can offer a targeted approach to the issue.

A further important factor which determines the watering needs of Alocasias is the type of soil you will use.

I recommend you use potting mixes formulated for tropical plants such as those containing coconut coir, peat, perlite or other fast-draining substrates in their mix.

I don’t recommend using regular potting soil exclusively for your Alocasia, only if you amend that soil with the substrates I recommended.

On its own, regular potting soil is too heavy. It becomes saturated with water and tends to become compacted.

Potting mixes formulated for Alocasia plants will drain faster and allow the roots of the plant to breathe, warding off root rot issues.

Plastic is affordable, comes in every size and color imaginable, and it’s widely available.  It’s also easy to fit with drainage holes and easy to handle.

Its only disadvantage? It locks moisture into the soil.

Terracotta pots on the other hand may be more expensive, can break easily, they may not come fitted with drainage holes, but they are great at absorbing moisture from the soil, allowing it to dry faster.

For plants that are sensitive and prone to root rot, I always recommend unglazed terracotta pots. While this will not absolve you from monitoring the moisture level of the soil, it can offer an extra layer of protection in case of accidental overwatering.

With all these factors that can change the watering needs of an Alocasia plant, watering your plant can become a complex thing that will depend a lot on your spirit of observation.

Below, I will offer some advice on how often to water your Alocasia, what are some of the signs of dehydration or overhydration, and what you can do when either of these happen.

How Do You Know if Alocasia Plant Needs Watering?

Alocasia plants will show symptoms of dehydration when they’ve gone too long without being watered.

An Alocasia that needs water can showcase a lot of symptoms such as:

With the exception of dried out potting mix, each of these symptoms can also be a sign of other issues as well, so it’s important to exclude those as a possible explanation before concluding that your Alocasia is dehydrated.

For example, droopy, curled leaves can also mean a pest problem or overwatering. Yellowing leaves can be a symptom of a lack of light or over-fertilizing.

Dehydration can appear both in summer and in winter, so it’s not necessarily tied to a certain season.

It is true, however, that during periods of drought and intense heat, you’ll need to pay extra attention to the watering needs and humidity requirements of your Alocasia to avoid severe dehydration.

How Often to Water Alocasia Plant?

There’s no fixed watering schedule that will work across the board for all Alocasia plants everywhere. All that I can tell you is this: Water you Alocasia as often as it’s needed.

For some, this may mean twice a week, for others it can be once a week. Just think of all the factors I described above that can alter the watering needs of your Alocasia.

What I recommend is to periodically check the moisture level of the potting mix. That’s usually a very good indicator – even on its own – of when to water your Alocasia.

If you stick your index finger into the potting mix up to the first knuckle and feel that the soil is dry, you can go ahead and water your Alocasia.

How to Water Alocasia Plant?

Not that you have a general idea of when and how often to water Alocasia plants, there’s another issue that I would like to address – how to water the plant.

Here are my best tips on the matter:

Overwatering appears when you water too often and too much without checking on the moisture level of the soil.

Here are the tell-tale signs of an overwatered Alocasia:

If you notice these signs or some of these signs in your Alocasia, you can conclude that it has been overwatered.

You can either repot the plant in a fresh potting mix and refrain from watering it or if the problem is not as severe, allow the potting mix to dry.

My go-to response to overwatering, however, is to repot it as soon as possible. I also remove any soft or damaged parts of the roots to prevent further rotting.

An underwatered Alocasia will display the same symptoms as I mentioned when I discussed dehydration issues in Alocasia plants, namely:

How Long Can Alocasia Plant Survive Without Watering?

If you miss a watering here and there, your Alocasia will forgive you. But the plant will not go long without watering or showing symptoms of dehydration.

But it all depends on several factors, as you well know. How hot is it? How much light is there? Whether there’s enough humidity or not? And so on.

Tropical and subtropical plants can be difficult to keep happy indoors or outside of their own habitat. But just because it’s difficult, it doesn’t mean it’s impossible.

Try to do your best in understanding the needs and requirements of your Alocasia and don’t be afraid to make changes when things don’t seem to be working for your plant.

With a bit of attention and dedication, you too can successfully grow these wondrous plants indoors. 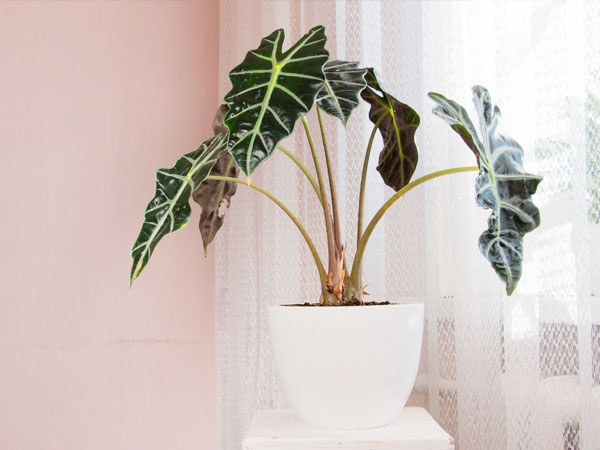 Why are Alocasia Leaves Drooping? 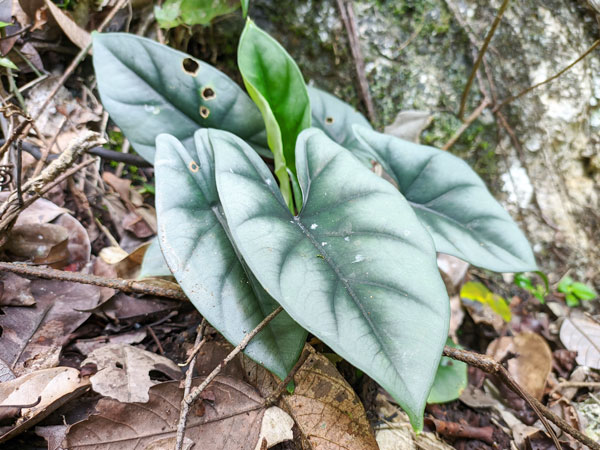 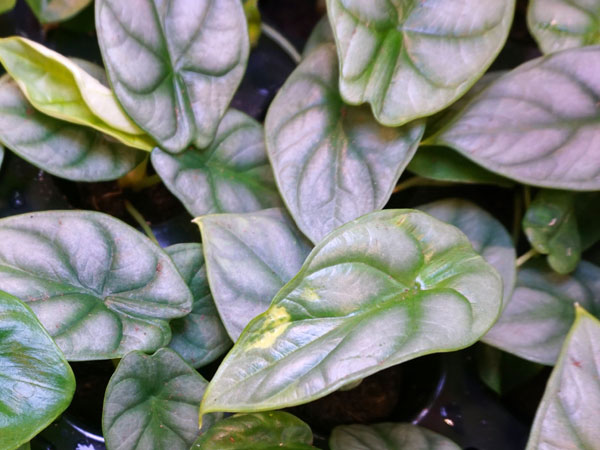 How to Care for Alocasia Silver Dragon? 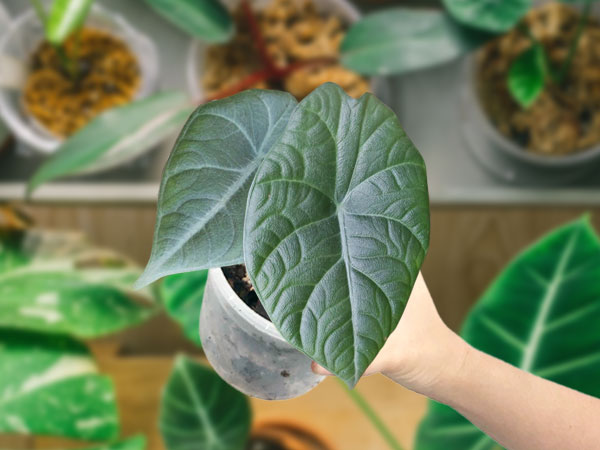 How to Care for Alocasia Maharani?