Because of their small size and compact growth, these plants are popular houseplants. While they’re tropical perennials, some peperomias enjoy humidity and light, but not all cultivars behave in the same way or thrive in the same conditions. 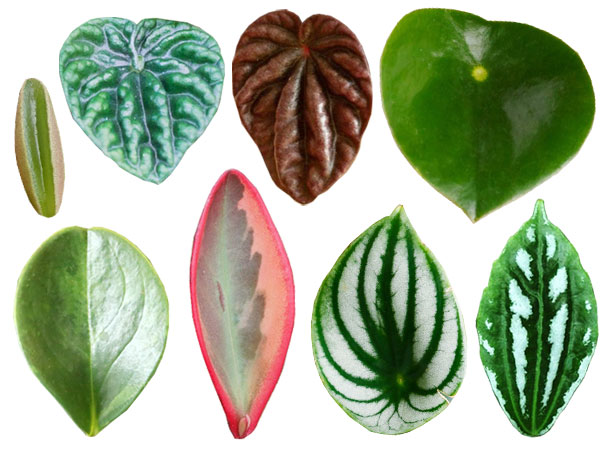 Peperomia plants are easy to grow indoors; they also boast an impressive variety of leaf shapes, colors, textures and sizes, making them an appealing choice for a houseplant.

Below, I’ve compiled a list of the most interesting and sought-after types of peperomias to give you a taste of what peperomias can offer in terms of variety and sizes: 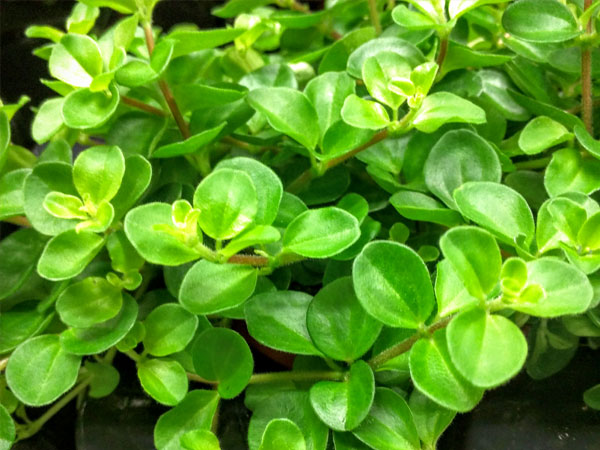 An emblematic type of peperomia, the Rotundifolia has trailing vines packed with rounded leaves that are a gentle green color. Left untrimmed, the vines will intertwine and grow thick in a cascading pattern.

It’s a slow-growing plant that will reach 8-11 inches at maturity. Allow the soil to dry between watering sessions, making sure you don’t overwater it. 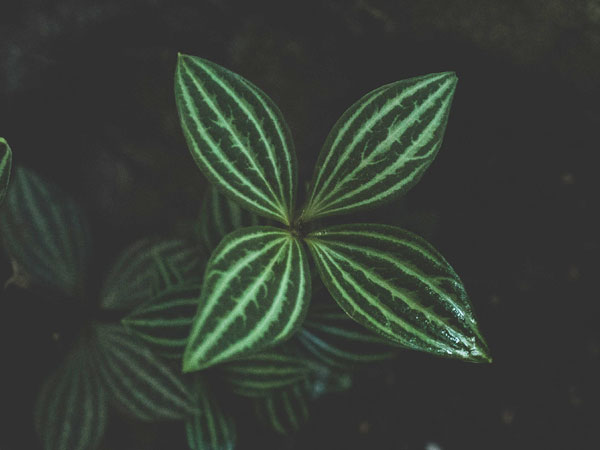 With sturdy, orange-hued stems, the Tetragona is a memorable and highly decorative peperomia type. It features almond shaped leaves with off-white or light green stripes that run alongside the length of the leaf.

Beyond the interesting leaf pattern, the coloration of the stems results in an attractive foliage plant.

While it enjoys higher levels of humidity, it is not picky when it comes to average humidity levels. It thrives in bright, indirect light. 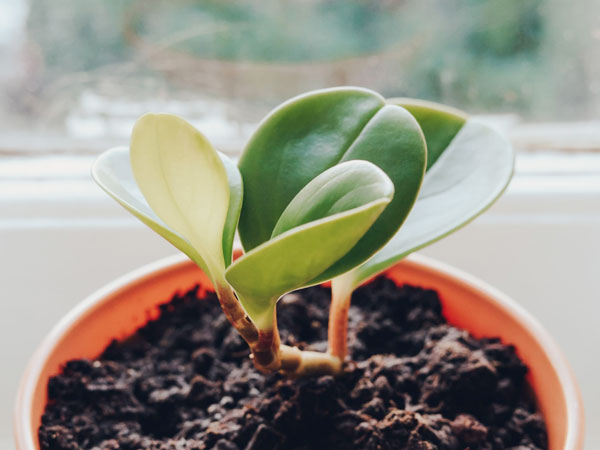 With shiny and fleshy leaves, the Obtusifolia is a cute peperomia variety. Its variegated leaves in green-yellow and rounded leaves make this variety an attractive choice for a houseplant.

The plant enjoys bright, indirect light but it will adapt to low light conditions as well. It doesn’t tolerate overwatering, so understand its watering needs beforehand.

Based on its look, you might mistake this variety for a succulent plant. And not without cause — after all it has thick, fleshy leaves just like succulents do.

While not a succulent in its own right, the leaves of the Graveolens do retain some water, so allowing the potting mix to dry between waterings is a good strategy to keep this plant happy.

It features canoe-shaped leaves with maroon undersides that grow in an upright pattern. It’s one of the most attractive varieties that enjoys quite a bit of sunlight.

The Elongata is one of the larger peperomia varieties, growing larger than your average peperomia. Its main features are its large, elongated leaves with a light gray-green central vein that runs down the length of the leaf.

It’s a rare variety that needs more light than its cousins and doesn’t tolerate overwatering.

Similar in growth patterns and leaf shape to the Rotundifolia variety, the ‘Hope’ Peperomia is a round-leaved, trailing variety that looks delicate but it’s quite robust.

It has orange to pink-hued stems and medium-green, fleshy leaves. It’s extremely sensitive to overwatering and needs bright, indirect light for best growth.

To prevent overwatering, plant in a lightweight, loose potting mix that doesn’t hold onto water.

While similar in the shape of the leaves, the Serpens has much smaller leaves than its lookalike. They also have different care requirements, so make sure not to mistake one for the other.

A vining variety with bright green leaves, the Serpens variety should not be overwatered (allow the soil to dry between watering) and should be offered plenty of bright, indirect light.

If you want a peperomia with a bit of color to it, the Ruby Cascade will definitely fit the bill. Its leaves are heart-shaped, with green on the upper side and a ruby-red hue on the underside.

It’s a trailing peperomia and one of the largest growing ones of its kind, reaching over two feet long if it’s allowed to grow unfettered.

While it’s adaptable when it comes to light conditions, it enjoys bright light the most. However, not direct light because the leaves tend to bleach if exposed to strong direct light.

A highly textured variety in shades of maroon, the Caperata variety acts as a semi-succulent.

Its corrugated leaves grow in a compact, dense pattern, resulting in a full, overflowing plant.

It adapts to low light conditions and prefers humidity but adapts to average levels too.

A succulent-like peperomia with fleshy leaves that are silvery-green on top and scarlet red undersides and stems, the Rubella is a real gem of a peperomia. Grows best in diffuse light and makes a good specimen for growing in terrariums. 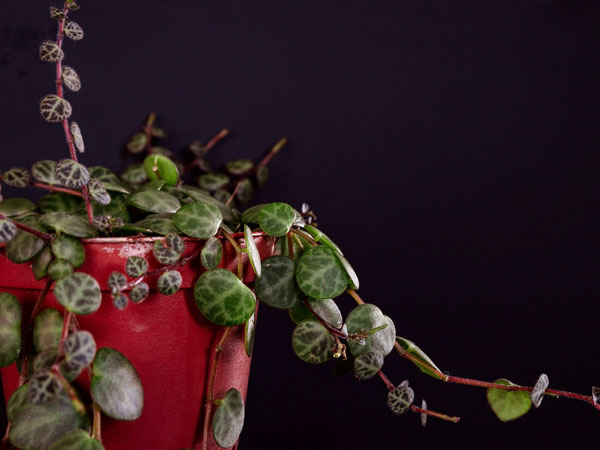 Also known as “String of Turtles”, this variety is another type you should consider as an indoor plant. Its leaves are small, rounded and fleshy, featuring the pattern of turtle shells.

Although it doesn’t grow fast, its reddish veins topple over to create a stringy plant over time. It enjoys bright, indirect light and it’s not as prone to root rot as many of its counterparts.

Another succulent-like peperomia in both its aspect and care requirements, the Dolabriformis features folded, canoe-shaped leaves.

While it features fleshy leaves and it isn’t fond of humidity, it doesn’t need bright light and does best in low light conditions.

Another textured peperomia variety, the Griseo Argentea features succulent-like leaves that are deeply ridged. As its name suggests, the top of the leaves is silvery green, while the undersides are a light pinkish-green.

As for its growth pattern, the leaves grow densely packed and can reach a foot high. Needs medium or bright, indirect light.

It’s a unique variety, especially when it comes to its growth pattern, which is column-like, just as its name suggests. The small, fleshy and triangular leaves grow close to the stems on their entire length.

The plant doesn’t need bright light, but it needs to be kept dry to prevent root rot.

It can grow up to 17 inches. Needs indirect light, humidity, but the soil should be allowed to almost dry a bit between each watering.

It can be grown even as a terrarium plant, but it can decorate a shelf or other furniture in your home. It needs bright indirect light to thrive.

It’s not a widely available variety, but it’s a striking one that features deep green leaves with a metallic sheen to them. The undersides of the leaves are a deep burgundy, resulting in an overall dark peperomia with lots of personality.

This plant grows bushier than its cousins and it prefers medium light levels so that it can stay bushy and maintain its leaf coloration.

It performs well in average humidity and should not be overwatered. It grows upright and reaches a height of 6 inches and a width of 8 inches.

As an epiphyte with small roots, this variety should be grown in loose, well-draining soil to fend off root rot issues.

It’s similar to the Tetragona variety, especially considering the longitudinal striping of its leaves, but unlike its lookalike it behaves much more as a succulent in that it’s sensitive to humidity and overwatering.

Not your typical peperomia in its aspect, the Maculosa looks a lot more like an aroid plant than a peperomia. It features large, oval-shaped leaves with delicate, light green or white veins on the surface.

It’s not a widely available variety, nor is it easy to care for. While elegant and attractive, it’s a specialty variety with more interest to collectors.

The Nivalis is a friendly looking peperomia with a succulent-like appearance that has folded, canoe-like leaves that feature a shiny, almost translucent stripe in their middle.

It’s a visually pleasing plant that usually stays at around six inches tall before it topples over and grows as a creeper plant.

Don’t overwater this plant that behaves as a succulent — needs little water and bright light to stay healthy.

It’s not a widely available variety, but it’s also not a rare peperomia type, so you might just come across it in your local garden center or you can find it online.

This is just a sampling of the variety offered by peperomia plants. There are lots and lots of other cultivars that you can research and check out if you’ve gotten the taste for peperomia plants.

Not all peperomias enjoy light or humidity, so make sure you check the care requirements of each before bringing them home.

They’re generally easy plants to look after, especially the more established cultivars. Overwatering is possibly the number one enemy of most peperomias, so choose a loose potting mix, and water them correctly. 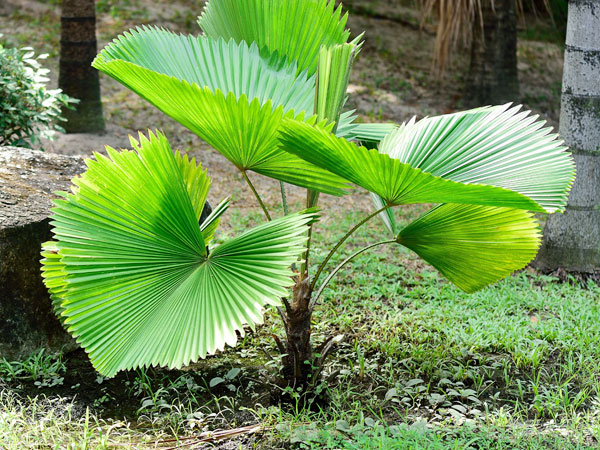 How to Care for Ruffled Fan Palm (Licuala Grandis)? 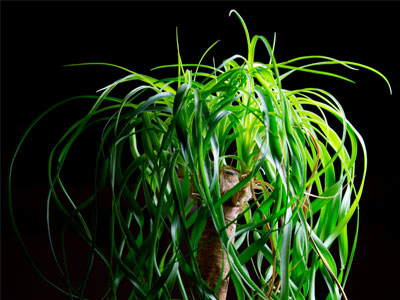 How to Care for Ponytail Palm? 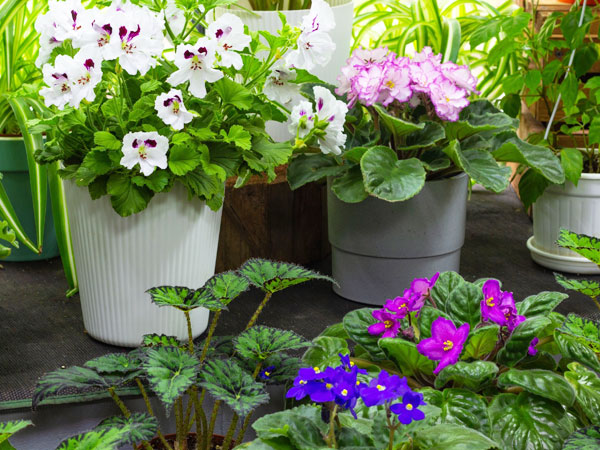 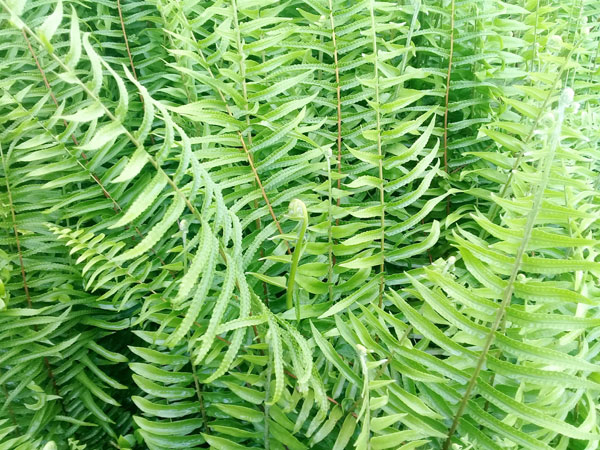 How to Care for Macho Fern?