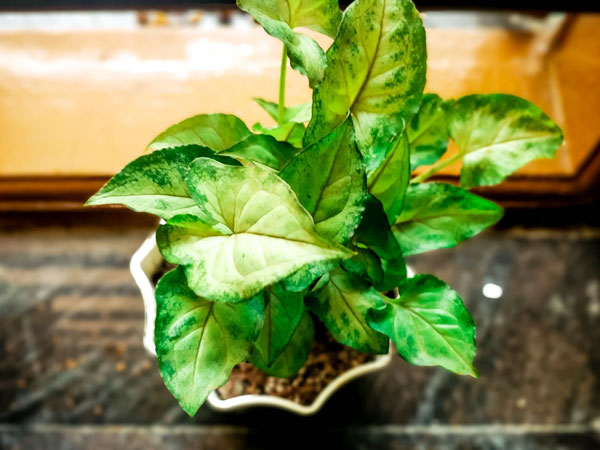 Even when overwintered indoors, these plants will go dormant in winter. Changes in temperature, light, and humidity will trigger their dormancy.

In spring, when light conditions become optimal again along with temperatures and humidity, arrowhead plants will start growing again.

If you want to be prepared to care for arrowhead plants in winter, I recommend you follow my tips and tricks.

Do Arrowhead Plants Die Off in Winter?

No, arrowheads don’t die off in winter. Not in their natural habitat nor outside of it, except if you forget to take them indoors.

If their care requirements are met, arrowheads go dormant for the duration of winter. In spring, they’ll come out of dormancy and resume growing normally.

To make sure your arrowhead safely survives its dormancy, there are a few adjustments you need to make in your care routine.

But before all that, there’s an important aspect that you need to know about preventing die off in arrowheads – you need to move the plant indoors before temperatures reach critical levels.

To know when it’s time to move your arrowhead plants indoors after a summer outdoors, you need to know which is the lowest temperature these plants can withstand.

I will answer this question along with many more in the following sections of this article.

Winter dormancy is not something typical only for arrowhead plants. Going into dormancy is something normal for perennial plants, for example.

The reason why dormancy happens is because the plant senses that environmental conditions have become unfavorable. Dormancy is the plant’s natural defense against seasonal changes.

During dormancy, arrowhead plants will either stop growing or their growth rates drop significantly. Any resources they use will be diverted to keeping the plant alive.

It’s normal then for the plant to no longer invest any energy into putting out new growths. Arrowhead plants will start growing again in spring.

There are several factors that trigger the plant’s dormancy, chief among them are:

In autumn, days become shorter and the weather turns bad, which means less natural light exposure for your arrowhead plant.

This is one of the first cues for arrowhead plants to prepare for their dormancy. The next cue is changes in temperature.

As temperatures go down, the arrowhead plant will start to feel out of its comfort one. Once the plant is moved indoors, humidity levels will also take a hit.

Indoor air is typically dry during winter, which is another factor that will trigger the plant’s dormancy response.

Because of these changes, you will also need to make changes in the normal care routine of arrowhead plants.

An important change concerns the watering routine. Other changes will be related to fertilizing, pruning and repotting this plant.

What is the Lowest Temperature for Arrowhead Plant?

Syngoniums or arrowhead plants thrive in temperatures between 65-85 °F. They can tolerate temperatures down to 55 °F – 60 °F.

Temperatures below 50 °F will damage the plant or even kill it. So, to make sure your arrowhead vines don’t die prematurely, take the plants indoors as soon as night-time temperatures are nearing 60 °F.

It’s best to be on the safe side and move your plants indoors sooner, rather than risk damaging or killing them because of an unexpected change in temperatures.

If temperatures in your area drop below 60 F in winter, it’s safer to overwinter the plant indoors.

No, arrowhead plants are not frost-tolerant. Even cold temperatures can kill the plant, let alone frost.

They’re even sensitive to cold drafts such as a window that isn’t insulated well or a door that lets cold air inside.

Don’t leave your arrowheads out in frosty weather because they will not survive. Even if temperatures are around 50 F, there’s a high probability that they won’t recover if they’re left outside.

Unlike perennials native to your area that will survive frost in winter, arrowhead vines will not. Because they’re tropical plants, arrowhead plants need to be taken indoors, even though they enter a dormancy period.

Caring for Arrowhead Plant in Winter

When you move your arrowhead plant indoors, you will need to focus on the following aspects to make sure the plant will have an undisturbed dormancy that will prepare it for the coming spring.

Natural light decreases in winter along with light intensity, but that doesn’t mean you can toss your arrowhead plant into a dark corner.

Aim to offer the best spot for your arrowhead even indoors. Choose a room or location where the plant would still get bright, indirect light.

You can even move it closer to a southern window to maximize light exposure. West-facing or east-facing windows are also suitable.

If winters are notoriously lacking in sunshine in your area, you can offer your arrowhead plant artificial lighting. LED grow lights or even fluorescent lights can make a difference.

In winter, there is a high chance for you to overwater your arrowhead plant. The watering needs of your arrowhead will change with temperatures dropping.

You will need to decrease frequency, but you still need to follow the watering recommendation to only water the plant if the top few inches of the potting mix are dry.

Because the plant uses less resources, its watering needs will decrease. In spring, you can resume the normal watering routine.

Because its metabolism will kick into high gear, the plant will need more water to put out new growth.

Despite this, you should always keep an eye on the moisture level of the potting mix and never water the plant if the top layer is still wet.

Without question outdoor temperatures become unfavorable to your arrowhead vine as soon as they start to drop below 60 °F.

Once you move your plants indoors, you still need to strive to keep the arrowhead vine in a location with temperatures preferably above 60 °F.

You should also watch out for cold drafts such as those caused by windows and doors. Protect your arrowhead wine even from strong sources of hot air such as heating vents.

Keeping temperatures in the range optimal for arrowheads will ensure that the plant won’t die off indoors.

Cold sensitivity and frost sensitivity in tropical plants should not be taken lightly, so keep these in mind when trying to find a good spot for your arrowhead vine.

If indoor humidity levels remain within the average range (40%-60%) your arrowhead plant might not suffer too much because of a lack of humidity.

If humidity levels drop below 40%, you will need a humidifier to keep the leaves from getting droopy and dry.

If a humidifier is not something you want to invest in, try making an evaporation tray by filling a tray with pebbles and some water.

Place your potted arrowhead plant on the pebbles, making sure the bottom of the pot doesn’t touch the water line. When water evaporates from the tray, it will naturally increase humidity levels.

Humidifiers have a stronger and more efficient way of increasing humidity levels but evaporation trays can also get the job done.

Unlike water, fertilizer is not needed at all during the dormancy period. Because the plant does little to no growing, adding fertilizer will only make it harder for the plant to go into dormancy.

Stopping the fertilizing will allow the plant to go into dormancy undisturbed. Once spring comes along, you can resume your normal fertilizing routine – once a month, with a balanced liquid fertilizer diluted to half-strength.

Don’t do any pruning during winter. You should schedule pruning in spring and summer. You can remove dead leaves, dried leaves or leaves that are damaged.

It’s not advisable to do any pruning in winter or during the dormancy period. Because the plant’s metabolism is slowed down, it doesn’t have the resources to recover.

Pruning can leave the plant even more weakened than it already is. Not to mention that it can falsely signal to the plant that it needs to put out new growth.

Even if the plant will put out new growth in winter, it’s unlikely that it will be viable or strong enough, so it’s best not to disturb the arrowhead vine from its winter slumber.

Like pruning, repotting should also be carried out in spring or summer. It’s not a good idea to repot the plant in winter.

Unless there’s a major issue that would warrant repotting (e.g., overwatering), leave the arrowhead vine in its current pot until spring comes along.

In spring, you can move the arrowhead plant to a larger pot if it has outgrown its current pot or replace its potting mix and leave it be.

Either way, replacing the potting mix is essential to repotting. In a fresh mix, the arrowhead plant will grow stronger and healthier.

As you can see, you can cut off some of the things from your care routine when overwintering arrowhead vines indoors.

Because these tropical plants go dormant in winter, their needs change. They need less water and no fertilizing. They should not be pruned or trimmed, nor repotted.

What you should do instead is maintain a watering schedule adapted to winter (decrease frequency) and maintain warm temperatures and humidity.

In spring, when the weather turns warm and nice again, you can resume fertilizing and increase watering.

And when you’re sure the risk of a late spring frost or a temperature drop has passed, you can move your arrowhead vines outdoors again. 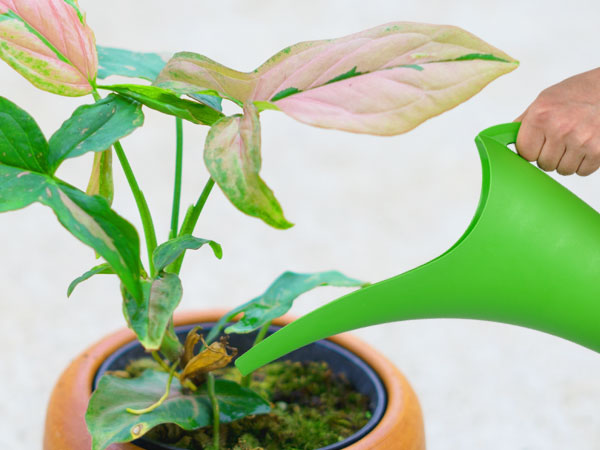 How to Water Arrowhead Plant? 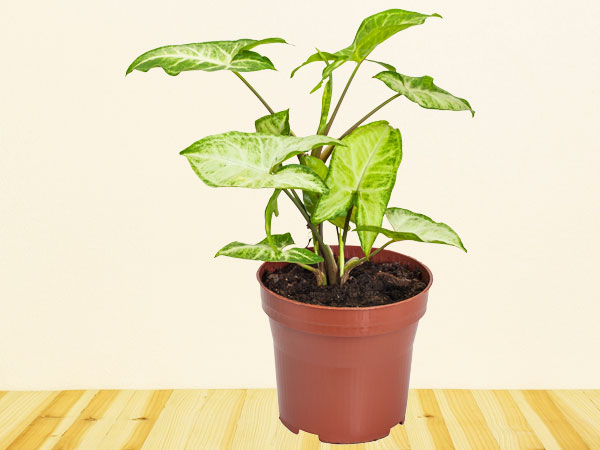 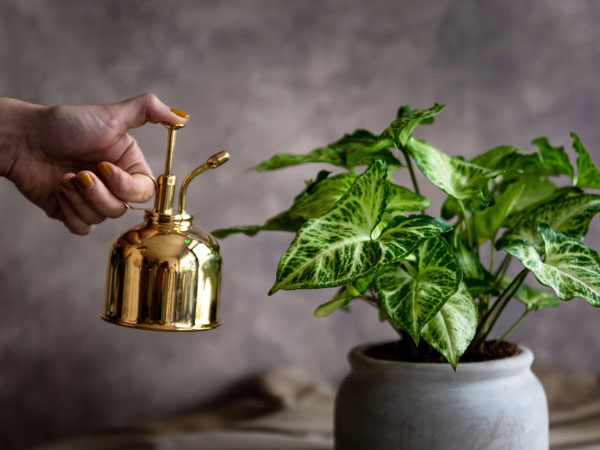 How to Care for Arrowhead Plant? 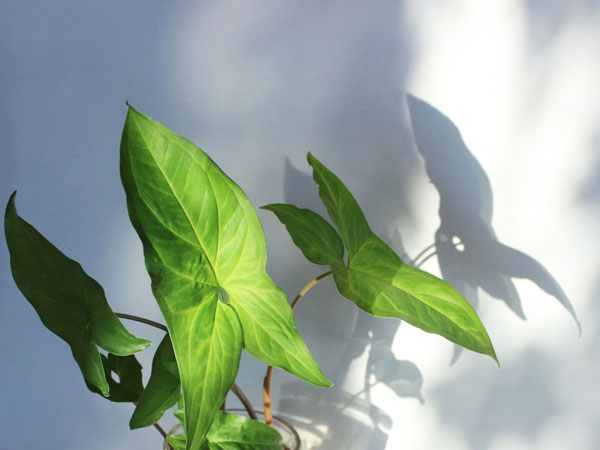